My Heathkit station is made up of the same models that I built and used in the late ‘60s, but they are not my original pieces of equipment. I sold them long ago…
DX-60 transmitter, from the early ‘60s.  CW and AM; 80, 40 20, 15, and 10 meters; puts out about 50 watts.  It is crystal controlled unless you use an external vfo with it.  The final amplifier is a 6146 vacuum tube.
HG-10b vfo.  This is the matching VFO for the DX-60.  Probably a few years newer than the transmitter.   It covers 6 and 2 meters in addition to the other bands.
HR-10 receiver, matches the transmitter and is also a good 55 years old.  All knobs, no menus 😉 and covers the same bands 80 – 10 meters.  The receiver has no narrower filters to use; it has a crystal calibrator that puts out a signal every 100 kHz that you can turn on to ‘calibrate’ the dial, helping you to know ‘where you are’ on the band.
They use all tubes except for some rectifier power supply diodes.  Operating with separate transmitter and receiver is a bit of a challenge after all these years.  Transceivers handle keeping the receiver and transmitter on the same frequency, turning the transmitter on and off, and muting the receiver during transmit, etc.   With this style of operation, just answering a cq isn’t easy.  I’m still learning how to get the transmitter tuned the frequency of the calling station I’m hearing on the receiver.  But, it’s all good, it’s all fun!

The transmitter in this picture is a Johnson 500 and the receiver is a Hammarlund HQ-129X.  W3GMS 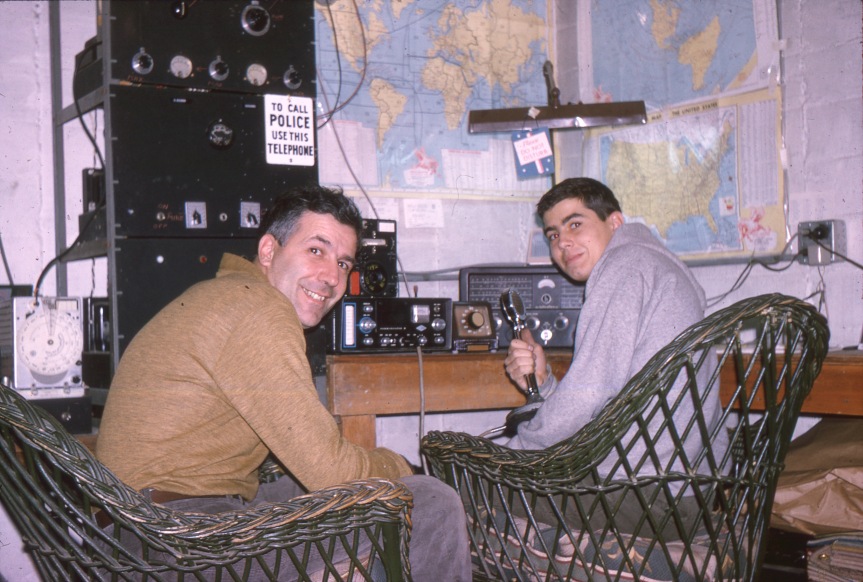 From Left to right was a home brew 40 & 80M transmitter; power supply with mercury vapor tubes on the bottom, modulator and driver stage is the middle, and finals on top of the rack.  Next one to the right, on top, is the ARC5 used as the VFO for the rack.  A Gonset Communicator IV with D104 mike, a CDR rotor control and then we had a Halicrafters SX-71 General Coverage Receiver. The HF used a wire and the stacked J beams rounded out the VHF portion.

To the right of the VFO is a Lafayette HE-30 receiver with matching speaker. On top of the receiver is a Heathkit HD-20 100 KC crystal caliber and an external BFO 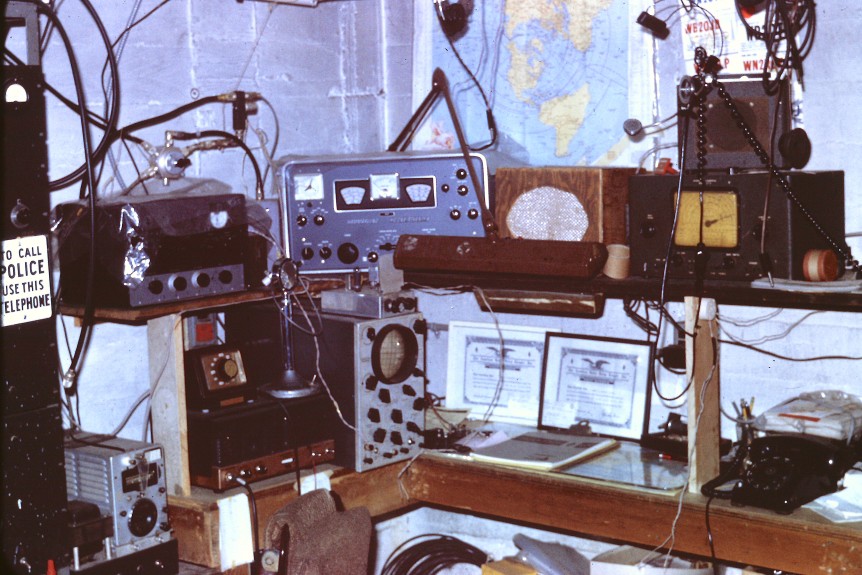 I came across another photo of Dad(Mario WB2OMV) & I’s  basement shack. On the left is a 40& 80M transmitter with Mercury Vapor tubes. The Arc 5 was the VFO. Complete with the famous D104 mike. That is a rotary phone on the right, Dad loved to build speaker enclosures.
Outside was a 30’ crank down, fold over  tower. Plain functionality was the keyword.
73 Rob W3OMW,  former WB2OMW